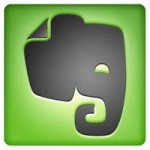 Evernote is one of the simplest and most useful tools on the web for physicians or anyone who deals with lots of information and data.It’s a virtual hard drive with elegant organization and search functions.

There are lots of “apps” and tools competing for your attention these days. Evernote is one of those products that cuts through the hype and has had a consistently loyal following from the beginning…because it works. As I stated in a previous post, the combination of Evernote and a LiveScribe Echo pen is potent.